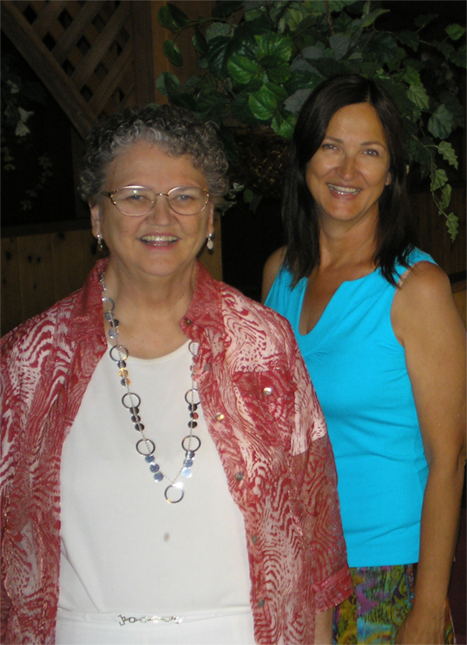 Imperial Ambulance, Inc. is owned by Linda Robinson and Emily Thiroux who were born and raised in Porterville. 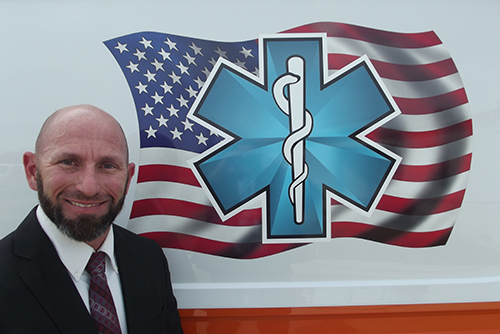 My name is Trent Fiori and I am the current President of Operations here at Imperial Ambulance, Inc. I would like to thank you for your interest in the Company and to give you a little information about how I started working for a Company that gave me the opportunity to achieve the success I have today!

As I was growing up in Porterville, my family lived next door to Imperial Ambulance, Inc. and as a kid, emergency vehicles were very exciting. Naturally as time went on I became very intrigued with the ambulances coming and going all the time with their lights and sirens blaring. I thought to myself how exciting it would be to ride in one of those ambulances some day. So when I graduated from high school, I worked during the day and I went to Porterville College at night where I was enrolled in the EMT-I program.

Upon completing the EMT-I program at the age of nineteen, I then applied for a job at Imperial Ambulance. Upon my interview, Imperial Ambulance offered me a future in becoming part of a “Team” that consisted of a steady family oriented and rewarding employment that would benefit my future achievements. After working for a few months I quickly realized that the reward of working for an ambulance company was no longer about being a kid and riding in an ambulance with the lights and sirens blaring. It was about giving patient’s the utmost “Compassionate care” in the time of need.

Imperial Ambulance quickly realized my passion for wanting to provide a higher level of care to patient’s so Imperial Ambulance offered to send me to EMT-II training. Upon completion of the EMT-II program, I became the youngest EMT-II in Tulare County at the age of twenty. While working as an EMT-II, I worked a ninety-six hour workweek, received the “Sierra View District Hospital Call of The Year” twice, became a shift Supervisor, transitioned into the Human Resource Manager position and began the Paramedic upgrade program.

Prior to completing the Paramedic upgrade program, the current President of Operations decided to retire from Imperial Ambulance. Upon the notification the Board of Directors offered me the position to run the company. This was an exciting but difficult decision since I cared about both the company and the patients needing my help. The difficult part in accepting the position would require that I leave the Paramedic program and the ability to treat patients’ in the field. The exciting part of accepting the offer is I would be starting a new chapter with the Company that would benefit my success for years to come. 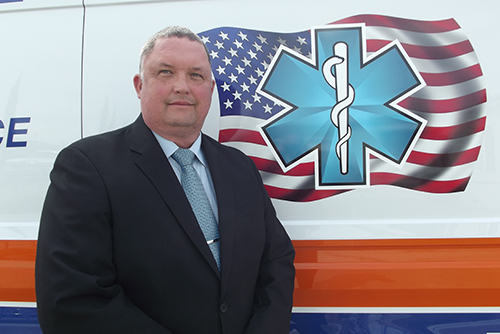 Having lived in the Porterville area my entire life, and serving as a paid-call firefighter for several years, I had always observed, and appreciated, the professionalism with which the EMT’s of Imperial Ambulance operated. My family owned a clothing store in downtown Porterville for 27 years where I had worked since I was 12 years old. Unfortunately, I was forced to close that business in 2005.

Having gone to work for Imperial Ambulance in 2004 as a part-time EMT, I was able and fortunate to transition into another career, almost immediately. I have served Imperial as an EMT, Safety and Training Officer, Human Resource Manager, Operations Manager and now an accumulation of all the above as Director of Operations and Human Resources.

In May of 2019, I received my ordination as a Lutheran Pastor. I currently serve two churches in that capacity, which means that I am a very busy man, but the combination of serving not only in that capacity but also for the people we serve at Imperial, I find the benefit and reward is beyond measure.

I have been married to my wife Jody for over thirty years. We have four children, Cody, Brandon, Sabrina and Megan, along with two grandchildren Adele and Mathias. My family is active in 4-H and FFA and volunteer with the Porterville Fair.

Being affiliated with Imperial Ambulance has given me the continued opportunity to serve my community. Imperial is and always will be the family oriented business that I certainly appreciate. 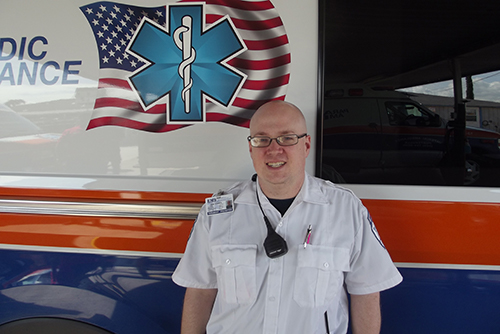 Sean Roberts has more than 17 years of EMS experience. He is currently a Paramedic Field Supervisor and is also responsible for training, and inter-agency disaster preparedness. In addition, he is an American Heart Association BLS, ACLS, and PALS instructor as well as a primary EMT instructor. Sean enjoys working and serving the same community he lives and raises his family in. Sean has a passion to help make the community better prepared for emergencies and enjoys teaching CPR and bleeding control to local organizations and community members to make them better prepared to respond in the event of an emergency. Sean enjoys working for Imperial because of its family like environment and the strong sense of community. When he is not at work Sean enjoys hiking in the nearby Sequoia National Forest and spending time with his family.

I grew up in Camp Nelson Ca. I love everything about the mountains. In my spare time enjoy hiking in the mountains, riding in the desert, and road trips going anywhere. I also enjoy reading anything and everything I find interesting. I received my education at San Joaquin Valley College and have worked in medical billing since graduating in 2012. I joined Imperial Ambulance in April of 2019 and am the newest CPR and First Aid Instructor, as well as handling front office and billing matters.

I have been working in EMS for 7 years. I grew up in Southern California and started my EMS career as an Emt in Orange County. Once I had grain sufficient experience as an Emt I decided to make the transition to Paramedic. I applied for my dream paramedic school at The UCLA Center for Prehospital Care, a division of The Geffen School of Medicine and was accepted. I completed this rigorous chapter of my career and was asked to join The UCLA Center for Prehospital Care staff, in addition to this I also worked as an emergency paramedic for Inglewood, Compton, Hawthorne, and Torrance. A good friend of mine that works for Torrance Fire Department recommended that I look into Imperial Ambulance in Central California, so I did. After reading about Imperial Ambulances and talking to their helpful team I decided to apply and was able to successfully get a job. Shortly after I made the move to the Central Valley and bought a house something that would have been impossible in Southern California. I’m proud to say that I’m a Supervisor with Imperial Ambulance, and love to help the community of Porterville and Tulare county.

Helping others and tending to the sick is my passion and I’m grateful to have the opportunity of working for Imperial Ambulance a company that prides it self in providing excellent patient care and setting the quality standard for emergency and non-emergency transportation of the sick and injured. In addition Imperial Ambulance is a family own company that prides in providing emergency and non-emergency care with utmost compassion to our patients, customers, and community.

The Pledge of the Paramedic

“Be it pledged as a Paramedic, I will honor the physical and judicial laws of God and man. I will follow that regimen which, according to my
ability and judgment, I consider for the benefit of patients and abstain from whatever is deleterious and mischievous, nor shall I suggest any such counsel. Into whatever homes I enter, I will go into them for the benefit of only the sick and injured, never revealing what I see or hear in the lives of men unless required by law.

I shall also share my medical knowledge with those who may benefit from what I have learned. I will serve unselfishly and continuously in order to help make a better world for all mankind.

While I continue to keep this oath unviolated, may it be granted to me to enjoy life, and the practice of the art, respected by all men, in all times. Should I trespass or violate this oath, may the reverse be my lot.”

So help me God.

Written by: Charles B. Gillespie, M.D. Adopted by the National Association of Emergency Medical Technicians, 1978

We are in business to provide for your emergency medical services. 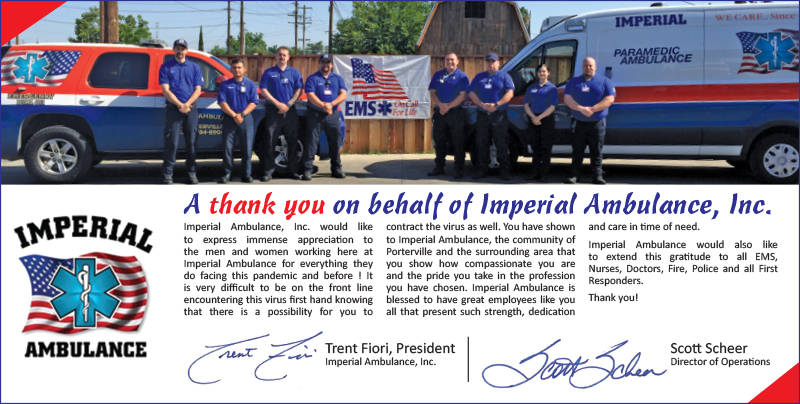